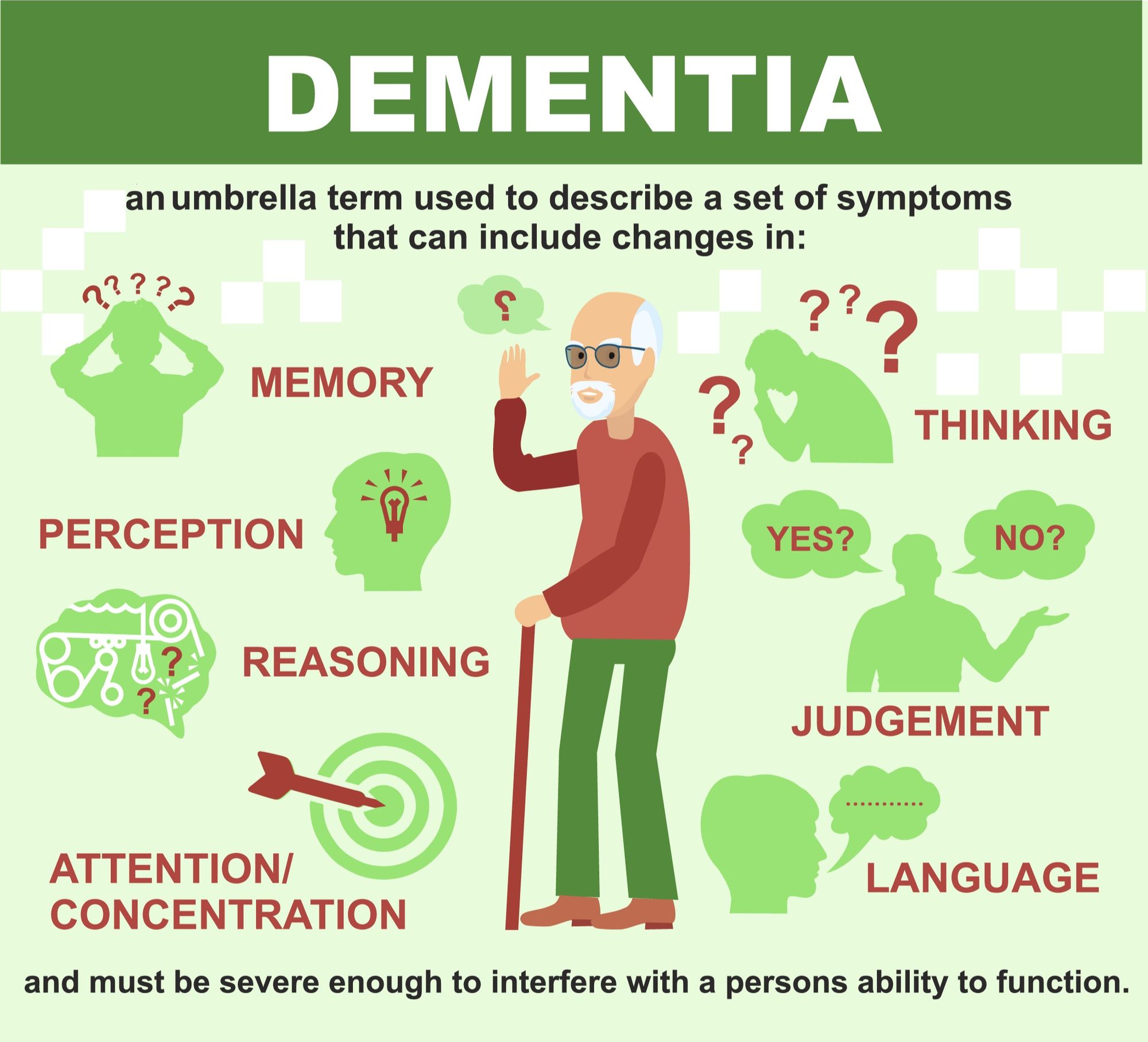 Dementia describes a group of symptoms which affects an individual’s memory, thinking and social abilities, severely enough to interfere with their daily life. It is an umbrella term, and not a specific disease, but several different diseases may cause dementia.

CAUSES
Dementia is caused by damage to or loss of nerve cells and their connections in the brain. There are a number of causes of dementia.

Alzheimer’s disease is the most common cause of a progressive dementia in older adults.

SYMPTOMS
Depending on the area of the brain which is affected, dementia can affect people differently and result in different symptoms.
Common signs and symptoms however include:

STAGES OF DEMENTIA
While viewing dementia in terms of stages can help with understanding how the disease progresses, it is important to note that it is a rough guide and not an exact timeline of how the disease will unfold.

There are several different systems used to grade dementia which include:
1. At the most basic level there is early, moderate, and end.
2. The Reisberg scale which is also known as the Global Deterioration Scale for Assessment of Primary
3. Degenerative Dementia (GDS), includes 7 stages.
4. The 7 stage Functional Assessment Staging (FAST) scale.
5. The Clinical Dementia Rating (CDR) in order to give a grade on a 5-stage scale.

I.  Dementia Stages in the 3 Stage Model

Stage 1 – Early/Mild dementia
Often this phase is only apparent in hindsight. At the time it may be missed, or put down to old age or overwork. The onset of dementia is usually very gradual and it is often impossible to identify the exact time it began.
The person may:
* Appear more apathetic
* Lose interest in hobbies and activities
* Be unwilling to try new things
* Be unable to adapt to change
* Show poor judgement and make poor decisions
* Be slower to grasp complex ideas and take longer with routine jobs
* Blame others for “stealing” lost items
* Become more self-centered and less concerned with others and their feelings
* Become more forgetful of details of recent events
* Be more likely to repeat themselves or lose the thread of their conversation
* Be more irritable or upset if they fail at something
* Have difficulty handling money.

Stage 2 – Middle/Moderate dementia
At this stage the problems are more apparent and disabling.
The person may:
* Be more forgetful of recent events. Memory for the distant past generally seems better, but some details may be forgotten or confused
* Be confused regarding time and place
* Become lost if away from familiar surroundings
* Forget names of family or friends, or confuse one family member with another
* Forget saucepans and kettles on the stove. May leave gas unlit
* Wander around streets, perhaps at night, sometimes becoming lost
* Behave inappropriately, for example going outdoors in nightwear
* See or hear things that are not there
* Become very repetitive
* Be neglectful of hygiene or eating
* Become angry, upset or distressed through frustration.

Stage 3 –  Late/ Advanced dementia/Severe/ End-stage
At this third and final stage, the person is severely disabled and needs total care.
The person may:
* Be unable to remember occurrences for even a few minutes, for instance forgetting that they have just had a meal
* Lose their ability to understand or use speech
* Be incontinent
* Show no recognition of friends and family
* Need help with eating, washing, bathing, toileting and dressing
* Fail to recognize everyday objects
* Be disturbed at night
* Be restless, perhaps looking for a long-dead relative
* Be aggressive, especially when feeling threatened or closed in
* Have difficulty walking, eventually perhaps becoming confined to a wheelchair
* Have uncontrolled movements
* Have permanent immobility, and in the final weeks or months the person will be bedridden.

Stage 1 – No Cognitive Decline: During stage 1 there is no noticeable cognitive impairment.

Stage 2 – Very Mild Cognitive Decline: A very mild decline will begin to be noticeable. A person in stage 2 may have slight problems with memory that may be attributed to aging. It is unlikely that dementia would be diagnosed at this stage.

Stage 3 – Mild Cognitive Decline: Loved ones and health care providers might begin to notice a mild decline in cognitive functions, including trouble with focusing, working, or organizing. This stage usually occurs approximately 7 years before the onset of dementia.

Stage 4 – Moderate Cognitive Decline: People with dementia in stage 4 will have obvious difficulty with problem-solving, remembering names and details, and may withdraw socially as new situations and places are challenging to them. A doctor will be able to diagnose dementia at this stage, which usually lasts about 2 years.

Stage 5 – Moderately-Severe Cognitive Decline: During this stage of dementia, there are many noticeable declines in function, and the person will require some assistance with the activities of daily living. Memory is often quite impaired.

Stage 6 – Severe Cognitive Decline: During this stage, the person will require assistance to complete most activities of daily living and may begin experiencing difficulty with speech or incontinence. Personality changes, including agitation and delusions, are quite apparent.

Stage 7 – Very Severe Cognitive Decline: In this stage of dementia, persons have lost the ability to walk and communicate, requiring assistance with all activities.

III. Dementia Stages in the FAST Scale
This scale focuses primarily on activities of daily living

Stage 2: The person may feel like they are experiencing some decline.

Stage 3: Early disease which may show effects in demanding situations.

Stage 4: Mild disease, in which the person requires some assistance with complicated tasks.

Stage 5: Moderate disease, in which the person requires some assistance with many activities of daily living.

Stage 6: Moderately-severe disease where the person requires full assistance with activities of daily living. They may experience incontinence during this stage.

Stage 7: Severe disease which removes the ability to speak, walk, smile, sit, and even hold one’s head up.

This scale combines an assessment of cognitive abilities with function. The CDR scale is mostly used in research settings.

CDR-0.5: Mild. There are slight but consistent problems with memory, perception of time, and problem-solving skills.

CDR-1: Mild. Short-term memory is quite affected, interfering with daily life. The person will not be able to perform complex activities, and will have a fair amount of difficulty with daily activities and hobbies, as well as overall independence.

CDR-2: Moderate. Memory function is greatly impacted, and the person is unable to care for themselves at home independently. Problem-solving, judgement, and social skills have all disappeared.

CDR-3: Severe. At this stage the person will no longer have awareness of time or space and will require assistance with all activities of daily living. Symptoms such as incontinence are common in this stage.

(Dementias that progress and aren’t reversible) 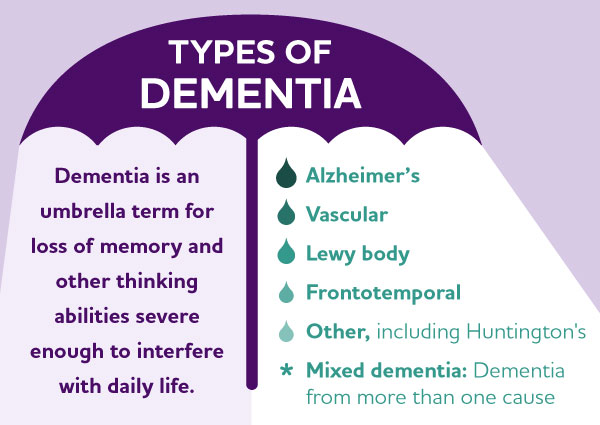 Alzheimer’s disease. Alzheimer’s disease is the most common cause of dementia.  Patients have plaques and tangles in their brains. Plaques are clumps of a beta-amyloid proteins, and tangles are fibrous tangles made up of tau protein. It’s thought that these clumps damage healthy neurons and the fibers connecting them.

Vascular dementia. This second most common type of dementia is caused by damage to the vessels that supply blood to your brain. The most common symptoms of vascular dementia include difficulties with problem-solving, slowed thinking, focus and organization. These tend to be more noticeable than memory loss.

Lewy body dementia. Lewy bodies are abnormal balloon-like clumps of protein. Common signs and symptoms include acting out one’s dreams in sleep, visual hallucinations, and problems with focusing and attention. Other signs include uncoordinated or slow movement, tremors, and rigidity (parkinsonism).

Frontotemporal dementia. This is characterized by the breakdown (degeneration) of nerve cells and their connections in the frontal and temporal lobes of the brain, the areas generally associated with personality, behavior and language. Common symptoms affect behavior, personality, thinking, judgment, and language and movement.

Mixed dementia. Autopsy studies of the brains of people 80 and older who had dementia indicate that many had a combination of several causes, such as Alzheimer’s disease, vascular dementia and Lewy body dementia. Studies are ongoing to determine how having mixed dementia affects symptoms and treatments.

Huntington’s disease – Caused by a genetic mutation, this disease causes certain nerve cells in your brain and spinal cord to waste away. Signs and symptoms, including a severe decline in thinking (cognitive) skills, usually appear around age 30 or 40.

Traumatic brain injury (TBI) – Depending on the part of the brain that’s injured, this condition can cause dementia signs and symptoms such as depression, explosiveness, memory loss and impaired speech. TBI may also cause parkinsonism. Symptoms might not appear until years after the trauma.

DEMENTIA-LIKE CONDITIONS THAT CAN BE REVERSED
Some causes of dementia or dementia-like symptoms can be reversed with treatment. They include: Infections and immune disorders, metabolic problems and endocrine abnormalities, nutritional deficiencies, dehydration, not getting enough thiamin (vitamin B-1), medication side effects, subdural hematomas, poisoning, exposure to heavy metals.

Severe Cognitive Decline- Also known as Middle Dementia marks a period in which a person requires substantial assistance to carry out day-to-day activities.

• Create a safe environment
Dementia impairs judgment and problem-solving skills which increases a person’s risk of injury.
To promote safety:
** Prevent falls. Avoid scatter rugs, extension cords and any clutter that could cause falls. Install handrails or grab bars in critical areas.
** Use locks. Install locks on cabinets that contain anything potentially dangerous, such as medicine, alcohol, toxic cleaning substances, dangerous utensils and tools.
** Check water temperature. Lower the thermostat on the hot-water heater to prevent burns.
** Take fire safety precautions. Keep matches and lighters out of reach. If the person with dementia smokes, always supervise smoking.  Make sure a fire extinguisher is accessible and the smoke and carbon monoxide detectors have fresh batteries.

• Create a calm, relaxing environment – Remove stressors and clutter. Evaluate whether the living space is too loud and chaotic.

• Avoid stress-inducing triggers – Noise, glare and background distraction (such as having the television on) can act as triggers.

• Monitor personal comfort – Make sure the room is at a comfortable temperature. Take care of their toileting needs regularly and check for pain, hunger, thirst, fatigue, infections and skin irritations.

• Provide a security object – Provide a favorite blanket, a bible, or anything familiar and comforting that the individual with dementia enjoys holding or being near.

• Provide opportunities for exercise – Go for walks together.