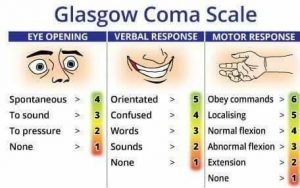 Occupational therapy treatment is graded based on the score on the GCS.
Score <8, severe injury – treatment begins with passive range of motion, sensory stimulation activities.

The Motor Response component of the GCS. 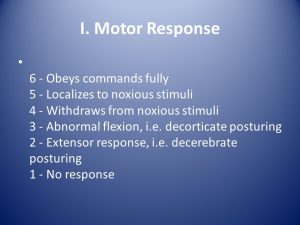 When an individual scores below four points on motor response, the scale identifies a decorticate or decerebrate posture response.

Posturing is frequently observed in patients who are comatose following a traumatic brain injury. Decorticate and Decerebrate posturing refers to primitive, stereotyped motor responses exhibited by patients with severe brain injury. These are reflex motor movements as opposed to functional motor actions. 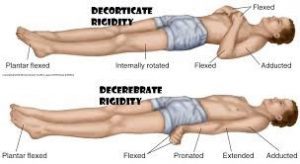 Decorticate Posturing/Rigidity – the patient  postures with the arms adducted and flexed, the fists clenched, the legs extended and internally rotated, and the feet turned inward. Decorticate rigidity in response to pain results in a Glasgow Coma Scale M rating of 3.

Mnemonic for DECORTICATE POSTURING: Remember the letters COR in the word decorticate for the word “core”. The patient will bring their ARMS to the core of the body (middle).

Mnemonic for DECEREBRATE POSTURING: Look at all the E’s in the word. There are a lot of them, so remember the word EXTENDED.

A decorticate posture is indicative of a lesion in the cerebral hemispheres or disruption of the corticospinal tracts. Although it is serious, it is usually not as serious a decerebrate posture. The posturing may occur on one or both sides of the body.

Go to next topic