The charts below review the traditional neurological treatment approaches of: 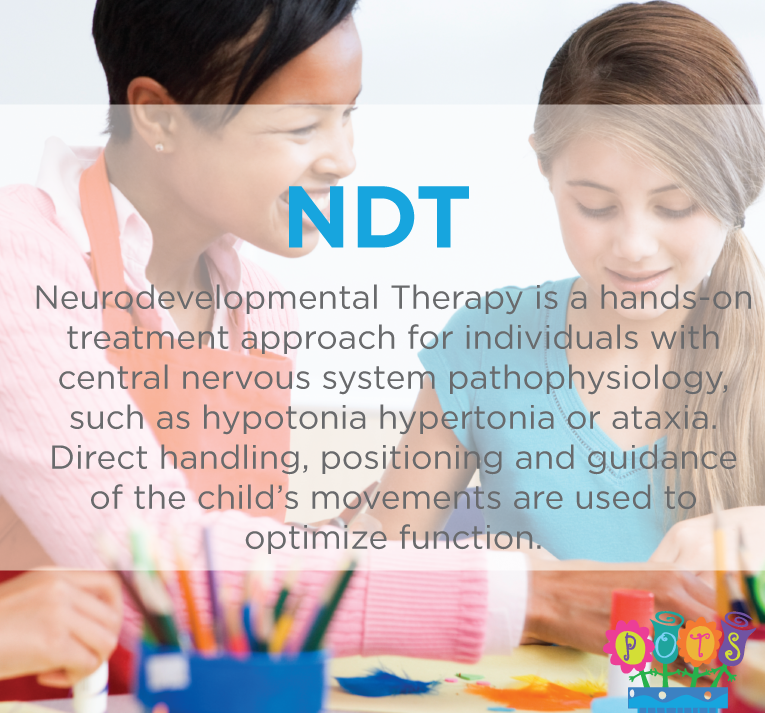 Basis – Neuromuscular movement is facilitated by stimulating the proprioceptors using assorted techniques superimposed on patterns of movement and posture. There are 11 developmental principles associated with PNF.

Principles of PNF
1. All human beings have potentials that are not fully developed.
-abilities become the means for reducing inabilities
2. Normal motor development proceeds in a cervico-caudal to proximodistal direction.
-head to foot
-trunk to extremities
3. Early motor behavior is dominated by reflex activity. Mature motor behavior is reinforced or supported by postural reflex mechanisms.
-reflexes do not disappear, but instead become integrated into the nervous system
4. The growth of motor behavior has cyclic trends as evidenced by shifts between flexor and extensor dominance.
-interaction between the movements of flexion and extension is necessary to develop function
5. Goal-directed activity is made up of reversing movements.
-movement is rhythmic and reversing throughout life
-if a person cannot reverse direction, function will be limited
6. Normal movement and posture are dependent upon “synergism” and a balanced interaction of antagonists.
-the goal of the PNF approach is to achieve a balance of antagonists
-without balance, quality of movement decreases
7. Developing motor behavior is expressed in an orderly sequence of total patterns of movement and posture.
-functional activity is based on total movement patterns
– the normal developmental sequence includes combining movements of the extremities as they interact with the trunk, head and neck
-direction of movement also develops in an orderly sequence
8. Normal motor development has an orderly sequence but lacks a step by step quality. Overlapping occurs.
-the order of the developmental sequence helps the therapist to find a place to begin treatment.
9. Improvement of motor ability is dependent upon motor learning.
-proprioceptive feedback plays a role in conditioned responses
-sensory cues enhance motor learning
10. Frequency of stimulation and repetition of activity are used to promote and for retention of motor learning and for the development of strength and endurance.
-motor learning occurs when the body has repeated a movement enough to become neurologically integrated.
-repetition occurs naturally during activity
11. Goal-directed activities, coupled with techniques of facilitation, are used to hasten learning of total patterns of walking and of self care skills.
-facilitation techniques and activity together enhance neurological integration. One or the other is not enough.

PNF Diagonal Patterns
Two pairs of diagonal patterns exist for every major part of the body. Each pattern consists of three movement components, which include flexion or extension, internal or external rotation, and abduction or adduction. 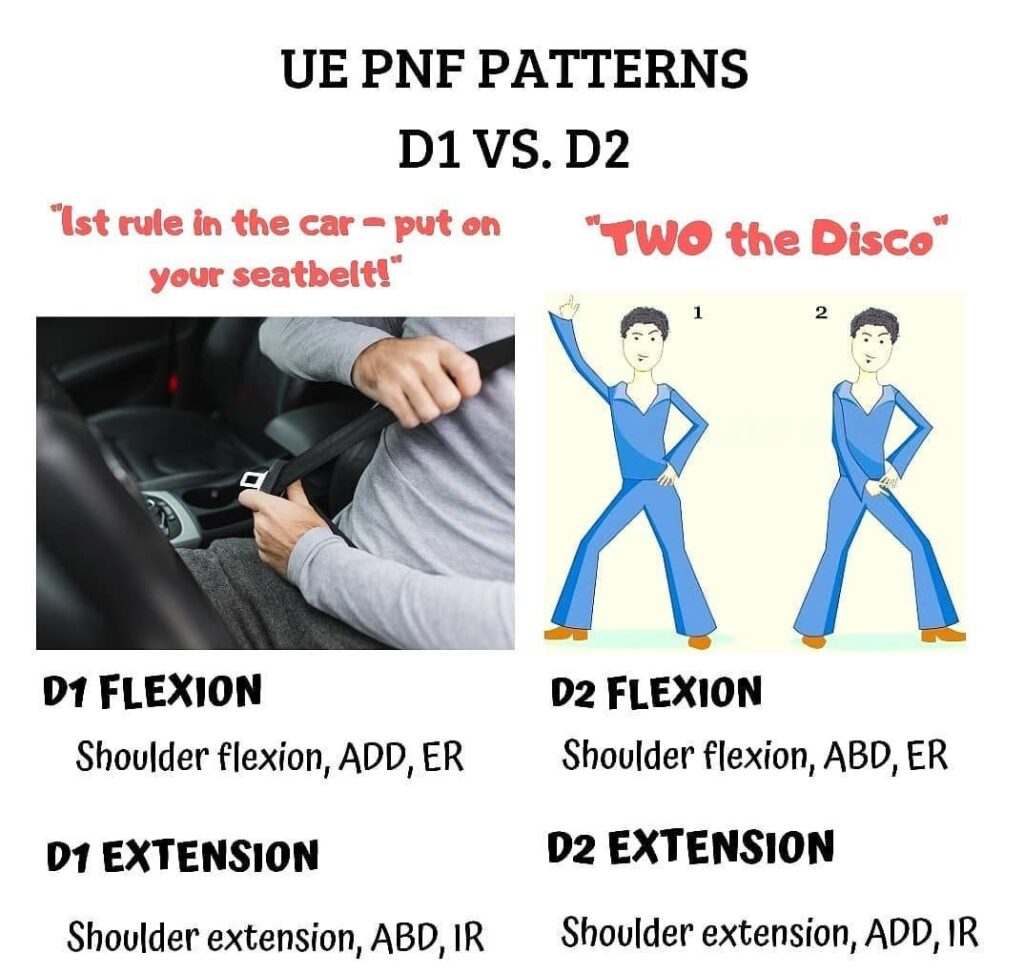 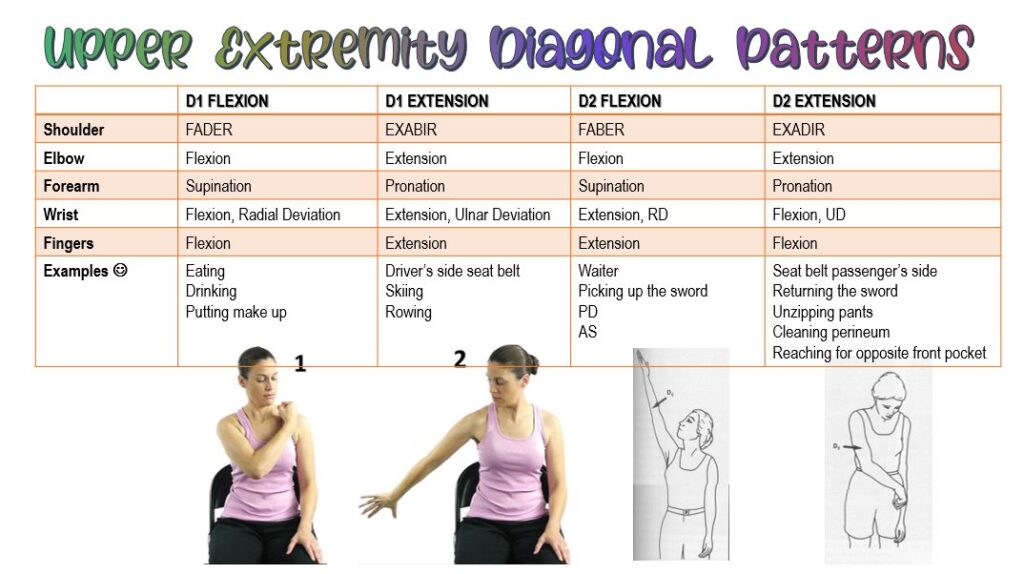 Basis – <style=”background-color: yellow; color: #000000;”>Synergies and reflexes that are a normal part of early development should be included as a part of the sequence of return of motor function in hemiplegia. 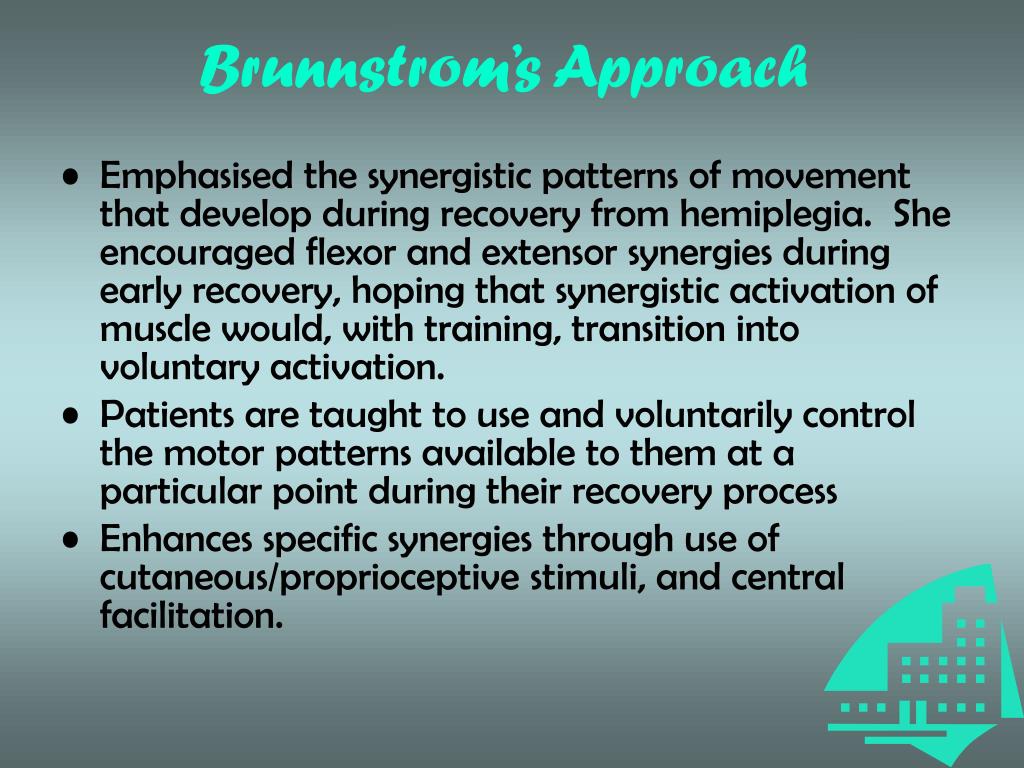 Basis – Motor patterns develop from basic reflex patterns present at birth which are gradually modified through sensory stimuli until mature control is achieved on a conscious, cortical level. 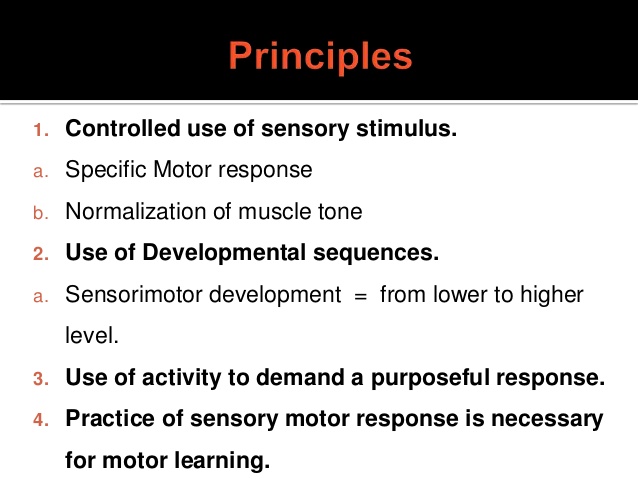 Four components of the Rood Approach
1. Normalization of tone and facilitation of desired muscle responses is acquired through the use of appropriate sensory stimuli.
2. Sensorimotor control is developmentally based and must occur sequentially.
3. Movement is purposeful. Activities are used to create a purposeful response in the patient and elicit the correct movement pattern.
4. Repetition is necessary to establish sensorimotor responses. 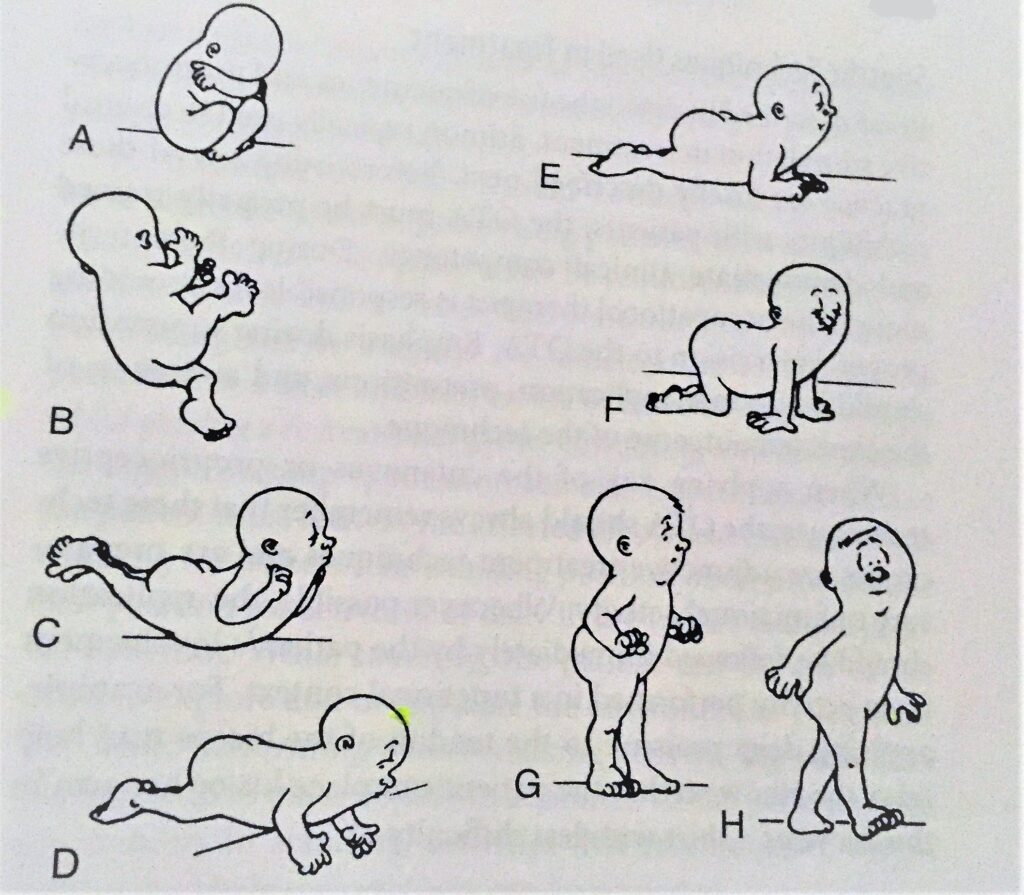 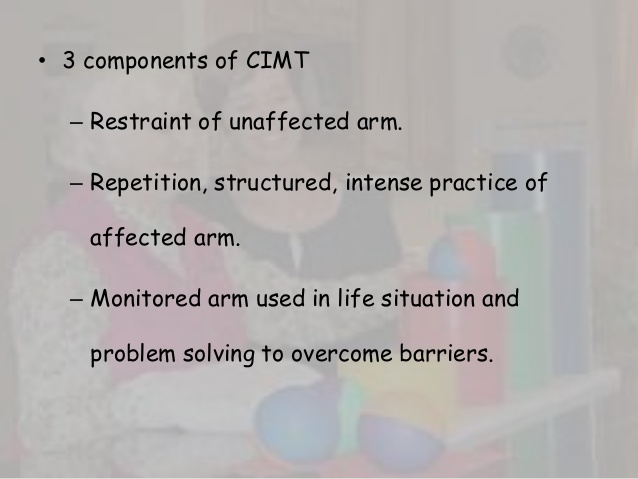 Hypothesis: Patients who present with an insult to their CNS, develop “learned non-use” of their affected upper extremity basically because it’s easier to use their unaffected, more functional upper-limb. To prevent this pattern from developing, CIMT aims to use the brain’s neuroplasticity and ability to reorganize itself, to promote habitual use of the affected upper limb. This is achieved by engaging the patient in intense and repetitive functional activities.

CIMT is typically performed with individuals following a CVA as the majority of CVA survivors will experience some functional loss in their impaired limb. It can also be used with individuals who have CP (hemiplegia), TBI and MS.

Minimum inclusion criteria for CIMT:
• 20º wrist extension
• Up to 10º thumb abduction
• Up to 10º finger extension in any two digits
Also, in order for CIMT to be more beneficial, it is suggested that the patient has:
• Limited spasticity
• Ability to move the affected arm 45º of shoulder flexion and abduction, and 90º of elbow flexion and extension
• Adequate balance
• Minimal cognitive dysfunction

1. Unmodified CIMT: The original CIMT involves the restraint of the individual’s unaffected upper extremity with the use of a safety mitt. The mitt is left on for 90% of the day, over a 2-week intervention period in conjunction with 6 hours a day, 5 days of the week of task-specific training. Only activities involving toileting, hygiene and bathing are permitted.

2. Modified CIMT (mCIT):This is a more pragmatic model that was developed to promote better compliance. mCIMT protocols include less clinical treatment time with OT practitioners, providing the patient with an increased amount of time to be spent on home-based practice using the affected upper extremity functionally and during activities of daily living. The program typically consists of 3 hours per day for 5 days/week, for a minimum of 4 successive weeks. In total there will be 20 treatment sessions totaling to 60 hours. The individual is expected to use their affected extremity for a minimum of five hours at home during each week day. There are many different formats of the mCIMT, differing in practice and constraint time, however, all protocols share the same components which stem from the original CMIT. 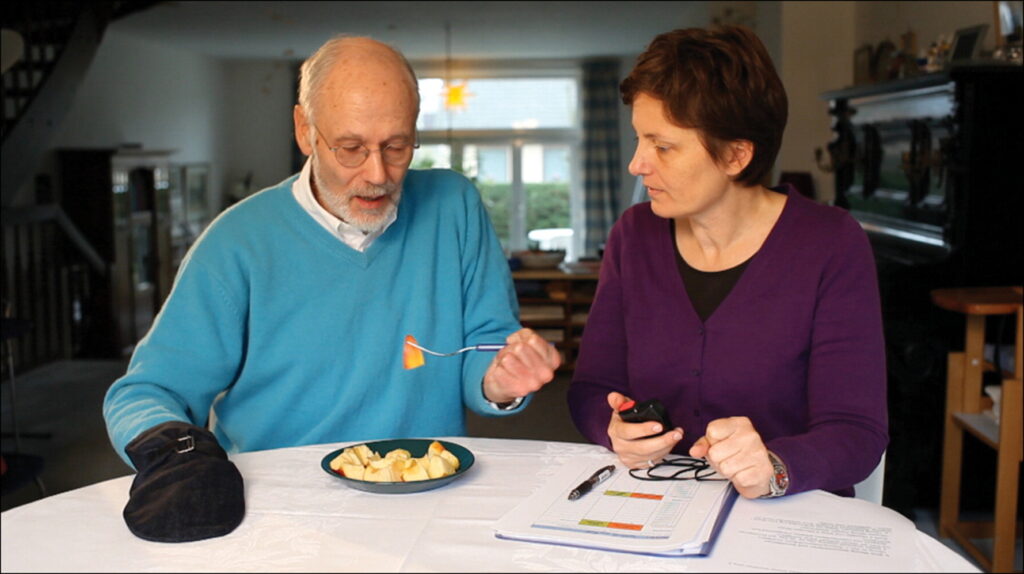 Feedback:
An important component of interventions designed to enhance motor learning is the feedback the person receives while attempting a movement strategy and from the results of the movement action. Feedback refers to the sensory experiences intrinsic to the person and the external information provided by the environment, which includes verbal comments from the OT practitioner- feedback during the performance of the motor tasks and on completion of the motor tasks. These strategies are combined with shaping to foster a higher frequency of successful motor practice for functional tasks.

Shaping is considered the most important technique used in CIMT:
Shaping is a training method in which a motor task is gradually graded. Shaping programs are individualized, consisting of 10-15 tasks selected primarily from a basic battery of tasks. Shaping involves providing encouraging feedback immediately after any gain in function. The feedback is explicit to identify small improvements in motor or functional performance.
Shaping tasks are determined by OT practitioners based on: individual movement deficits at specific joints, joint movements that have the most potential for improvement, and patient preferences of specific tasks that would produce the desired movements.
With shaping, progression of movement tasks is made in a systematic, quantified, and parametric manner which makes the intervention time-specific. By using tasks that are individualized and meaningful for the patient, the experience is positive, especially when combined with feedback which promotes encouragement.

CIMT for the Adult vs Pediatric Patient

CIMT was developed for adults but it is a useful strategy to use with the pediatric population as well. As it is an intensive intervention in its original form, it is not child-friendly and therefore using the modified model is more appropriate. A key distinction between adult vs child, is that the underlying focus of the adult CIMT is on overcoming learned non-use, whereas children may have developmental disuse which requires them to focus on their impairments.