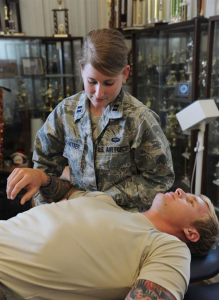 The table below is widely used as a reference for testing muscle strength. 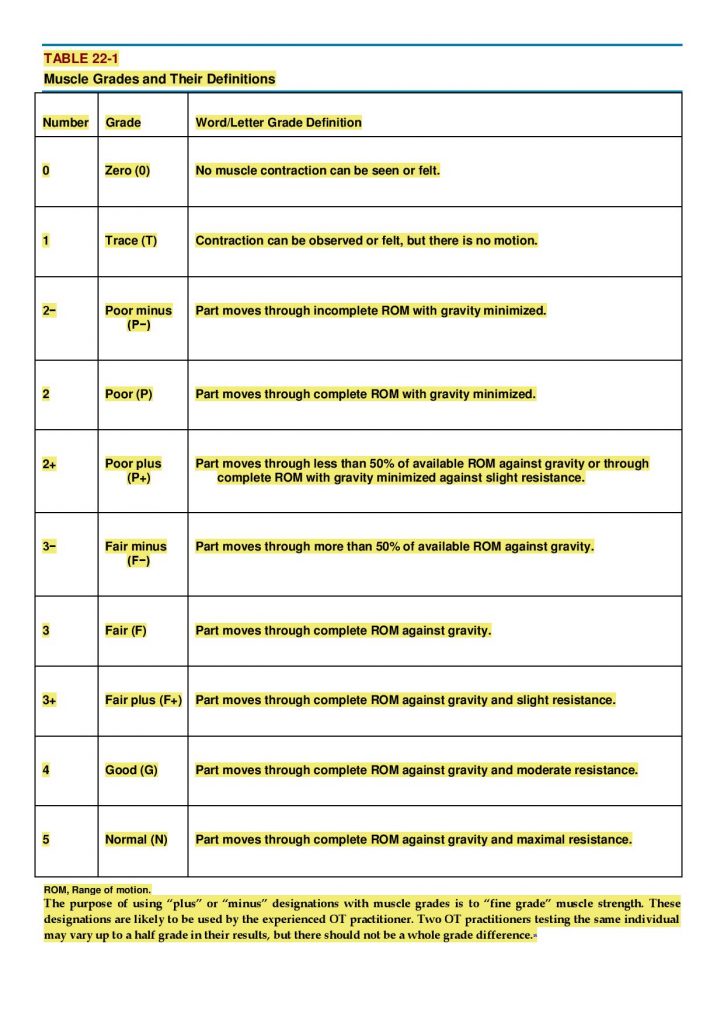 Isotonic – the muscle contracts to actively move a joint. There are two types of isotonic contractions

1.Concentric – the muscle actively counters resistance to move a joint. Example: a construction worker’s biceps contracts to bend the elbow as the worker lifts and draws a hammer back to pound a nail.
2. Eccentric – the muscle contracts to slow movement and stabilize a joint in reaction to quick movement or the forces of gravity. Example: the construction worker’s biceps contracts to stabilize the elbow as the worker sets his hammer down on a bench.

Isometric – the muscle contracts but does not actively move the joint. Example: a patient tenses and relaxes muscles as part of a relaxation technique.

1. Active-assisted, active, and resistive exercises are used to increase muscle strength.
2. The type of exercise/activity must suit the muscle grade and the patient’s fatigue tolerance level.
3. Grading of activities can be achieved by increasing or decreasing resistance. Methods include changing the plane of movement from gravity-eliminated to against-gravity, by adding weights to the equipment or to the patient, using weighted tools, grading the texture of the materials from soft to hard or fine to rough, or changing to another more or less resistive activity. The resistance applied should be the maximum against which the muscle is capable of contracting. Resistance may be applied manually or by weights, springs, elastic bands, sandbags, or special devices. The source of resistance depends on the activity, and resistance is graded progressively by increasing the amount of resistance. Gravity is a form of resistance.