Apraxia is a neurological disorder characterized by the loss of the ability to execute skilled movements and gestures, despite having the desire and the physical ability to perform them. Unlike paralysis, movements remain intact but the patient can no longer combine movements sequentially to perform desired functions e.g. dressing.  Apraxic patients are unable to perform skilled motor acts because their motor engrams (programs) that guide skilled acts have either been lost or cannot be accessed. The disturbance of purposeful movements cannot be termed apraxia if it results from a language comprehension disorder, dementia or if the patient suffers from any straightforward motor or sensory deficit (i.e paresis, dystonia, ataxia) that could fully explain the abnormal motor behavior.

CAUSES: Apraxia results from dysfunction of the cerebral hemispheres of the brain, especially the parietal lobes. Damage to the parietal lobes can arise from a variety of diseases/causes including: stroke (higher prevalence in left-sided vs. right-sided), metabolic diseases, head injuries, Alzheimer’s disease, Parkinson’s disease, supranuclear palsy, Huntington’s disease.

DIAGNOSIS: When diagnosing apraxia, looking for the presence of other symptoms is usually the first step, for example: muscle weakness or difficulties with language comprehension, as both are indicative of other conditions and their presence would help rule out apraxia. An MRI of the brain may also be useful to determine the extent and location of possible brain damage.

TREATMENT & PROGNOSIS: If apraxia is a symptom of another disorder, the underlying disorder is treated first and then depending on the type of apraxia, either physical, speech, or occupational therapy is implemented. The prognosis for patients with apraxia varies and depends partly on the underlying cause. Some patients improve significantly while others may show very little improvement.

EFFECTS OF APRAXIA ON OCCUPATIONAL PERFORMANCE:


Mobility & Functional Transfers: A patient may forget how to appropriately use a mobility device. For example, he may try to put the brakes on his wheelchair by pulling on the arm rests. The patient may have difficulty planning his movements in order to roll to his side and then sit up on the edge of the bed.

Productivity: Apraxia can negatively affect a patient’s ability to engage in employment, volunteering, driving, and home management, depending on the demands of the task and the severity/type of apraxia.

Leisure:  Patients with apraxia may find certain leisure activities (including physical activity, crafts, shopping) to be frustrating and less enjoyable. 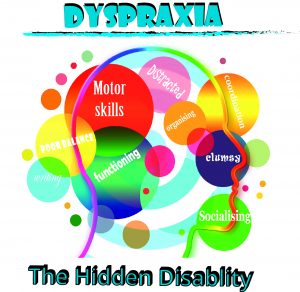 The terms apraxia and dyspraxia are often used interchangeably but there is a difference between these terms. The root word “praxia” means execution of voluntary motor movements; the “dys” means partial ability or partial loss; the “a” means absence of something.

Dyspraxia is the partial loss of the ability to coordinate and perform skilled purposeful movements, whereas apraxia refers to the complete loss of loss of this ability.
Dyspraxia affects a patient’s ability to plan and process motor tasks (motor planning). Although the exact causes of dyspraxia are unknown, it is thought to be caused by a disruption in the way messages from the brain are transmitted to the body. This affects a patient’s ability to perform movements in a smooth and coordinated way. Dyspraxia was formerly known and is still referred to as Developmental Coordination Disorder (DCD), which is the term to describe dyspraxia in children whose neurological development does not progress normally. 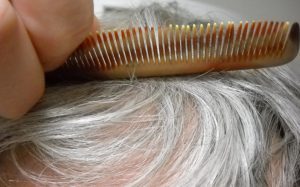 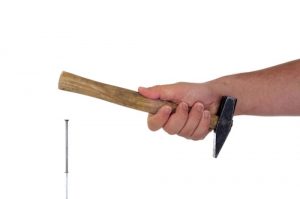 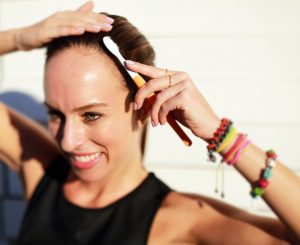 The word “apraxia” is also often confused with other neurological terms such as: ataxia, aphasia and dysmetria. The cerebellum contains more neurons than any other region in the human brain and plays a major role in motor control. Dysfunction of the cerebellum typically cause ataxia, dysmetria and tremor.

Ataxia is defined as the presence of abnormal, uncoordinated voluntary movements. Many symptoms of Ataxia can mimic those of being drunk – slurred speech, stumbling, falling, and incoordination.

Dysmetria is a lack of accuracy in voluntary movements. Patients either overshoot (hypermetria) or undershoot (hypometria) the aimed target during voluntary goal-directed tasks. They have difficulty controlling power, speed, and accuracy of movement. A patient may reach too far or not reach far enough when attempting to grasp an object; may walk into walls or doorways; may miss-estimate the distance to the seat of a chair and may fall as a result. The patient understands the concept of the movement needed to complete a task.  the patient can respond to commands but may have difficulty following through with tasks.

Tremor refers to an involuntary, rhythmic, oscillatory movement of a body part.

Aphasia is defined as a language disorder that affects production and/or comprehension of written or spoken language.

For a movement to be executed, its picture must be retrieved and activated and then be associated via cortical projections with the relevant motor engrams in the prefrontal regions. From here the information passes to the primary motor cortex before being fed down the corticospinal tracts. For the right upper limb to move the information remains contained within the left hemisphere, but for the left upper limb to move the information from the left parietal lobe must first be sent to the right prefrontal and frontal regions through the corpus callosum.

Ideational vs Conceptual Apraxia
Ideational apraxia has been defined as an impairment in performing tasks that required a sequence of several acts with tools and objects (e.g. prepare a letter for mailing). However, some authors also use the term to denote a failure to use single tools appropriately. To overcome this confusion, restricting the term ideational apraxia has been suggested to be used for a failure to conceive a series of acts leading to an action goal. Conceptual Apraxia was therefore introduced to refer to a loss of knowledge of how objects are used. However, a strict difference between ideational and conceptual apraxia is not always feasible.

Understanding dressing apraxia
Dressing Apraxia is usually associated with a posterior parietal lesion, especially involving the right hemisphere. If there is a deficit exclusively involving dressing the left side of the body, this would likely be a manifestation of hemineglect.
Visuospatial dysfunction appears to be the underlying deficit in dressing apraxia. Therefore, errors attributable to dressing apraxia include inability to orient the garment correctly, to align it correctly to the body, and to properly introduce the arms/legs into the sleeves/trousers.
Impaired tactile and visuospatial coordination plus a degree of hemineglect may explain why some patients with right parietal lesions have long-term significant difficulty with dressing.

A different type of dressing difficulty may be evident in some patients who appear to have difficulty executing a complex sequence of dressing tasks, as seen when a patient is in a confused state. However, these patients can usually manage one piece of clothing at a time whereas patients with dressing apraxia cannot. 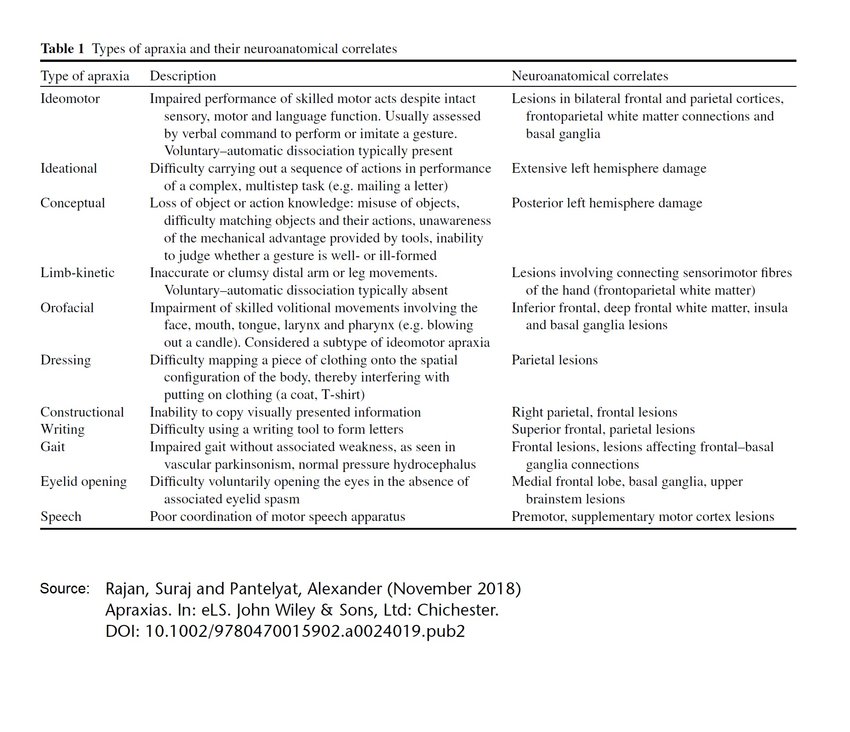