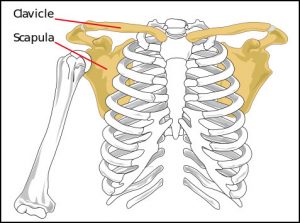 The shoulder girdle, also called the pectoral girdle, is formed by two sets of bones:

The girdle functions as the anchor that attaches the upper extremities to the axial skeleton. The glenohumeral joints/shoulder joints and the shoulder girdle work together in carrying out upper extremity activities.

– Contract to move the shoulder girdle and to enhance movement of upper extremity when the shoulder goes through extreme ranges of motion.

Movements of the scapula

The pectoral girdle or more specifically, the scapula movements includes:

1. Elevation: movement that allows the shoulder girdle to move upwards as in shrugging the shoulders.

2. Depression: the reverse of the elevation movement. The pectoral girdle and entire shoulder move downwards.

3. Scapular Abduction – also called scapular flexion or protraction. A movement where the scapula moves laterally away from the spinal column.

4. Scapular Adduction – also called scapular extension or retraction. This movement pulls the scapula back towards the rib cage. Pinching the shoulder blades together illustrates adduction of the shoulder girdle.

5. Downward rotation: rotating the lower scapula towards the rib cage as in moving the arm behind the back. 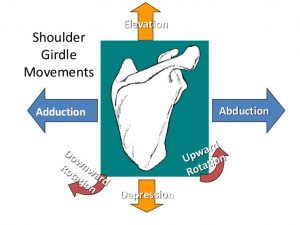 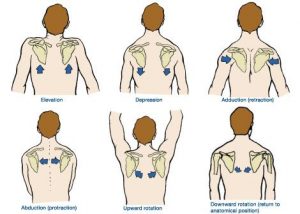 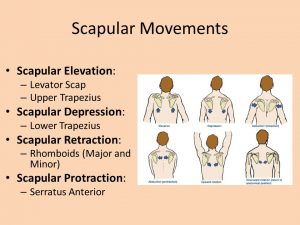 Movements of the shoulder 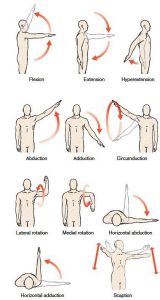 1.  Forward Flexion – The anterior movement of the humerus or upper arm at the glenohumeral joint.

2.  Extension – A posterior movement of the humerus at the glenohumeral joint.

4. Adduction – A movement of the arm toward the midsagittal plane of the trunk.

5. External Rotation – also called lateral or outward rotation. A movement around the long axis of the humerus at the glenohumeral joint . When the elbow joint is flexed to 90’ external rotation would cause the hand to move laterally or away from the midsagittal plane of the body.

6.  Internal Rotation – also called medial or inward rotation. A movement around the long axis of the humerus causing the hand, with the elbow flexed to 90’ to move toward the midsagittal plane of the body.

Scapulohumeral rhythm (also referred to as glenohumeral rhythm) is the kinematic interaction between the scapula and the humerus. This interaction is important for the optimal function of the shoulder. Both joints work in synergy to accomplish the desired action of the entire upper extremity. This synergy between scapula & shoulder joint muscles enhance movement of entire upper extremity.

Example:  to raise our hand out to the side laterally as high as possible, the serratus anterior & trapezius (middle & lower fibers) muscles upwardly rotate the scapula as supraspinatus & deltoid initiate glenohumeral abduction. 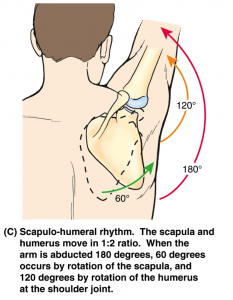 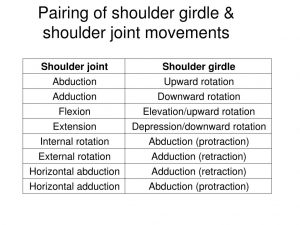