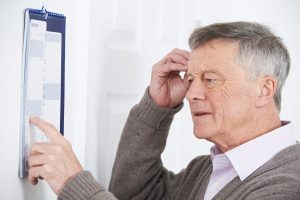 Reality orientation has been defined as an approach which may decrease confusion and dysfunctional behavior patterns in people with dementia.
Reality orientation provides information about the environment to orientate a person with dementia to their surroundings using aids and prompts. It uses an approach where the environment, including dates, locations, and current surroundings, is frequently pointed out and woven into the conversations with the person.
The tools for reality orientation aim to reinforce the naming of objects and people as well as a timeline of events, past or present.

This typically involves:
• Talking about orientation, including the day, time of day, date, and season
• Using people’s names frequently
• Discussing current events
• Referring to clocks and calendars
• Placing signs and labels on doors, cupboards, and other objects
• Asking questions about photos or other memorabilia

It is generally agreed that reality orientation may be delivered in two ways.

As a rule, reality orientation must be mixed with compassion and used appropriately to benefit someone living with the confusion that is associated with dementia. Applying this approach without evaluating if it might cause emotional distress, may be more harmful to the individual. In many situations, such as casual daily conversations, reality orientation can be used to help cue the person as to the setting around them. However, if the person to whom you’re talking becomes more distressed, you should cease to attempt to orient the person and let compassion drive your conversation by joining their reality.

Broadly speaking, reality orientation may be better suited for people with mild to moderate cognitive impairment. In this context, it not only helps delay nursing home placement but also provides an improved sense of control and self-esteem.

In contrast to reality orientation, validation therapy emphasizes the feelings behind the behaviors or statements. It encourages the person to talk about the reality they’re in (rather than the one we know to be true) and is based on the belief that by processing some unresolved issues, they’ll eventually be able to be more at peace.

Validation therapy aims to acknowledge a person’s feelings and to discuss those feelings to help orient them when events occurred, what they mean, and how they relate to current behaviors. It is a way to approach people with dementia, with empathy and understanding and is often used to comfort and reassure those people who are living with Alzheimer’s disease or other types of dementia.The basic idea behind validation therapy is that people who are in the late stages of life may have unresolved issues that drive their behaviors and emotions. The way caregivers or family members respond to these behaviors and emotions can either make them worse or help to resolve them. Validation therapy is more than simply validating a person’s feelings, although that is one component of it. It focuses on helping the person work through the emotions behind challenging behaviors. These behaviors are viewed essentially as a way to communicate those emotions, especially in people with memory loss, confusion, disorientation, and other symptoms of dementia.

According to the Validation Training Institute, people who practice validation therapy can use the following techniques:

As an example to illustrate how the techniques are used, imagine that your mother, who has Alzheimer’s disease, lives with you in your home and frequently calls out for her own mother.

1. Center Yourself
Take a deep breath and slow down. Your initial reaction may be to try to use logic when your own mother, who is 92 years old, starts calling out loudly for her mother. But before you react, think — and breathe.

2. Reminisce
Ask your mother what her mom was like, and what she misses about her. Share a memory about your grandmother with your mother and allow her to express her loneliness.

3. Use Extremes
Ask her if she always misses her mother, or what she misses most about her mother. This can allow her to process those feelings of grief related to losing her mother.

4. Match and Express the Emotion
Join with your mother in her feelings. Acknowledge the sadness of losing her mother and the special relationship they had with each other.

5. Rephrase
Rephrasing her feelings back to her can provide reassurance that you understand and feel her loss. Saying “You must really miss your mother” can decrease her anxiety because she hears you expressing what she is feeling.

6. Use Senses
Ask questions about her mother. For example, ask about her favorite food that her mother cooked and how it smelled, or how pretty her mother looked all dressed up for church on Sunday morning.