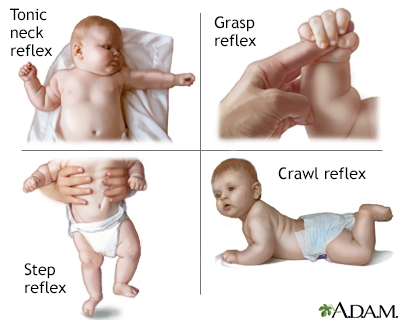 Primitive Reflexes
Automatic stereotypic movements in response to specific stimuli. They are controlled by the brainstem and therefore require no cortical involvement. These reflexes are necessary for the survival and development in the womb and in the early months of life.  However, as higher more sophisticated centers of the brain begin to mature, these primitive reflexes become integrated in order for proper neurological organization of the brain to develop.

2.  Equilibrium reactions (ER)
ER provide balance when the center of gravity is disturbed. They are more mature responses to regain balance than righting reactions. They consist of complex responses which seek to restore disturbed balance. Movement of the trunk and extremities in a direction opposite to the force which is causing displacement, is elicited.

** Segmental rolling develops at about six months of age and is a mature adaptation of the neck righting reflex and the body righting reflex. As its name suggests, rather than the body moving as a whole, rotation takes place at the central axis of the body and the shoulders and pelvis move separately. If the rolling movement starts with head rotation, the shoulders will follow, and then the pelvis. The movement can also be initiated from the opposite direction, at the pelvis.

Primitive Reflexes which are not integrated within the expected/typical developmental time period are known as: Persistent or Retained or Uninhibited Reflexes

Primitive reflexes are involuntary muscle movements that originate from the brainstem and executed without cortical involvement. They develop in-utero and are essential during the first few months of life for the infant’s survival. In typical development, during the first year, these reflexes naturally become inhibited in a sequential order. As the primitive reflexes are inhibited, they are replaced with postural reflexes which are more mature patterns of response that ultimately control balance, coordination and sensory motor development. New skills are acquired, and higher centers of the brain begin to mature and develop.

Reflex Integration refers to the inhibition of the reflexes by the higher centers of the brain which modify the reflex in such a way that the pattern of response is no longer stereotypical.

If primitive reflexes are retained beyond 12 months of life, they suggest evidence of a structural weakness or immaturity of the CNS. Their presence is therefore considered as being an indication that underlying neurological issues may exist. When these reflexes do not integrate, they may interfere with a child’s development of more advanced motor skills.

Children who have Neurodevelopmental disorders e.g. ADD/ADHD, Sensory Processing Disorders, ASD, or learning disorders typically have retained primitive reflexes that can contribute to their symptoms and affect their learning and behavior.