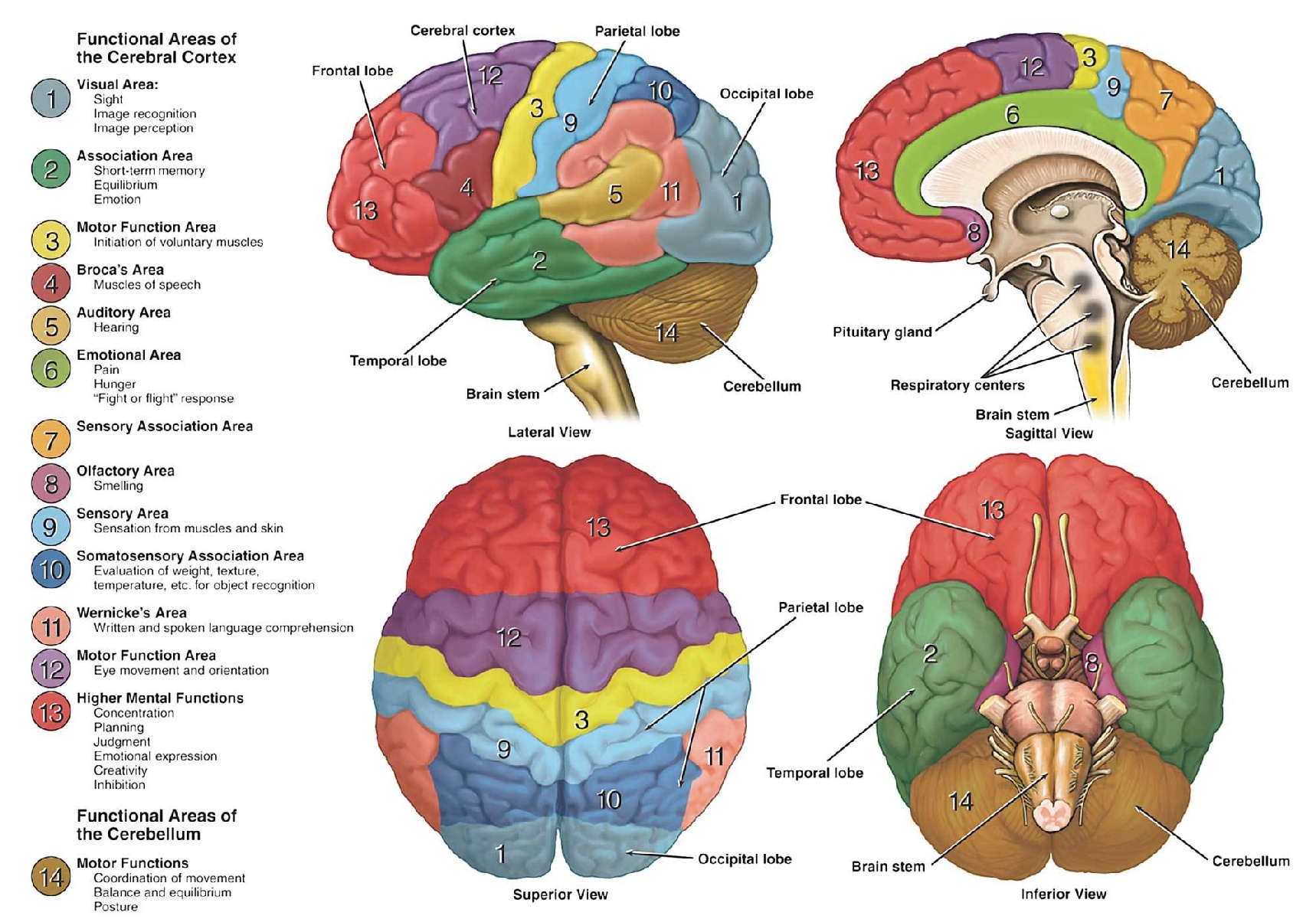 Each side of your brain contains four lobes. The frontal lobe is important for cognitive functions and control of voluntary movement or activity. The parietal lobe processes information about temperature, taste, touch and movement, while the occipital lobe is primarily responsible for vision. The temporal lobe processes memories, integrating them with sensations of taste, sound, sight and touch.

Language
Aphasia is a disturbance of language affecting speech production, comprehension, reading or writing, due to brain injury – most commonly from stroke or trauma. The type of aphasia depends on the brain area damaged.

• Broca’s area lies in the left frontal lobe (Fig 3). If this area is damaged, one may have difficulty moving the tongue or facial muscles to produce the sounds of speech. The person can still read and understand spoken language but has difficulty in speaking and writing (i.e. forming letters and words, does not write within lines) – called Broca’s aphasia.

• Wernicke’s area: lies in the left temporal lobe (Fig 3). Damage to this area causes Wernicke’s aphasia. The individual may speak in long sentences that have no meaning, add unnecessary words, and even create new words. They can make speech sounds, however they have difficulty understanding speech and are therefore unaware of their mistakes.

Memory
Memory is a complex process that includes three phases: encoding (deciding what information is important), storing, and recalling

• Short-term memory, also called working memory, occurs in the prefrontal cortex. It stores information for about one minute and its capacity is limited to about 7 items. For example, it enables you to dial a phone number someone just told you. It also intervenes during reading, to memorize the sentence you have just read, so that the next one makes sense.
• Long-term memory is processed in the hippocampus of the temporal lobe and is activated when you want to memorize something for a longer time. This memory has unlimited content and duration capacity. It contains personal memories as well as facts and figures.
• Skill memory is processed in the cerebellum, which relays information to the basal ganglia. It stores automatic learned memories like tying a shoe, playing an instrument, or riding a bike.

The cranial nerves: The locations of the cranial nerves within the brain.
• The olfactory nerve (I): This is instrumental for the sense of smell, it is one of the few nerves that are capable of regeneration.
• The optic nerve (II): This nerve carries visual information from the retina of the eye to the brain.
• The oculomotor nerve (III): This controls most of the eye’s movements, the constriction of the pupil, and maintains an open eyelid.
• The trochlear nerve (IV): A motor nerve that innervates the superior oblique muscle of the eye, which controls rotational movement.
• The trigeminal nerve (V): This is responsible for sensation and motor function in the face and mouth.
• The abducens nerve (VI): A motor nerve that innervates the lateral rectus muscle of the eye, which controls lateral movement.
• The facial nerve (VII): This controls the muscles of facial expression, and functions in the conveyance of taste sensations from the anterior two-thirds of the tongue and oral cavity.
• The vestibulocochlear nerve (VIII): This is responsible for transmitting sound and equilibrium (balance) information from the inner ear to the brain.
• The glossopharyngeal nerve (IX): This nerve receives sensory information from the tonsils, the pharynx, the middle ear, and the rest of the tongue.
• The vagus nerve (X): This is responsible for many tasks, including heart rate, gastrointestinal peristalsis, sweating, and muscle movements in the mouth, including speech and keeping the larynx open for breathing.
• The spinal accessory (XI): This nerve controls specific muscles of the shoulder and neck.
• The hypoglossal nerve (XII): This nerve controls the tongue movements of speech, food manipulation, and swallowing.