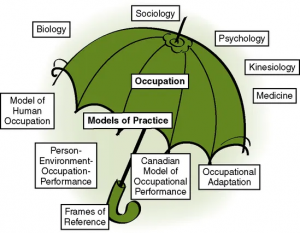 Model of Practice vs Frame of Reference (FOR)

Models of practice refers to the application of theory to occupational therapy practice. They can be thought of as “mental maps” that assist clinicians in understanding their practice. The main purpose is to facilitate the analysis of the occupational profile and to consider potential outcomes with selected interventions. This is achieved by bringing into focus the patient’s needs and abilities, contextual issues, and engagement in occupation. Models are not intervention protocols but instead serve as a means to view occupation through the lens of theory with the focus on the patient’s occupational performance. They aim to guide practice by providing a basis for decision-making. As occupation is the core of occupational therapy, they all deal with occupation in a central way- the commonality seen in each of the models is the focus on occupation.

Underlying models are 2 key approaches to facilitating occupational performance:
Remediation and Compensation.
* In a remediation approach, intervention is targeted towards improving performance components, with the assumption that such improvements will lead to enhanced occupational performance in the performance areas.
* A compensatory approach is used when remediation is not considered achievable or feasible. It “focuses on remaining abilities and aims to improve function by adapting or compensating for performance component deficits”. Examples of this approach include adapting the methods used to perform tasks, providing assistive devices, or modifying the environment.

Models should be applicable across settings and client groups instead of designed primarily for a specific diagnostic group.

Occupational performance is defined as the ability to perform those tasks that make it possible to carry out occupational roles in a satisfying manner appropriate for the individual’s developmental stage, culture, and environment. Occupational roles develop in conjunction with the occupations in which people engage and include roles such as pre-schooler, student, parent, homemaker, employee, volunteer, or retired worker.

1. Person
The person is conceptualized as consisting of unique sensorimotor, cognitive, and psychosocial systems, which are affected by biological, genetic, and phenomenological (experiences that we get from our senses, our consciousness…) influences and all of which are required for occupation.
This element can be viewed as the internal factors of the OA process. The desire for mastery over the environment is a constant factor in this process as it is always present – there is a constant demand for adaptation and mastery and this desire is innate in humans.

Biomechanical- The understanding of kinematics and kinesiology serves as  the foundation for the biomechanical FOR. The clinician  views the limitations in occupational performance from a biomechanical perspective, analyzing the movement required to engage in the occupation. Based on principles of physics the requirements to perform a task or activity are assessed and serve as the basis for intervention.

Rehabilitation- This FOR focuses on the patient’s ability to return to the fullest physical, mental, social, vocational, and economic functioning as is possible. The emphasis is placed on the patient’s abilities and using the current abilities coupled with technology or equipment to accomplish occupational performance. Compensatory intervention strategies are often employed. Regardless of the technology or equipment available, the clinician must always link the intervention to the patient’s occupational performance.

Sensorimotor- Several FORs are included in this grouping, such as proprioceptive neuromuscular facilitation (PNF) and neurodevelopmental treatment (NDT) . These approaches share a common foundation of viewing a patient who has sustained a central nervous system insult to the upper motor neurons as having poorly regulated control of the lower motor neurons. To recapture the control of the lower motor neurons, various techniques are employed to promote reorganization of the sensory and motor cortices of the brain. The specific techniques vary but the basic premise is that when the patient receives systematic sensory information, his or her brain will reorganize and the return of motor function will be obtained.